The proportion of euploid embryos in IVF PGT (Pre-implantation genetic testing) cycles decreases significantly with advancing maternal age. Recruitment of an adequate number of follicles is crucial in PGT cycles, and it can be regulated by administration of proper gonadotropin doses.

The objective of this study was to compare euploidy and pregnancy rates after administration of different dosages of gonadotropins in PGT cycles. 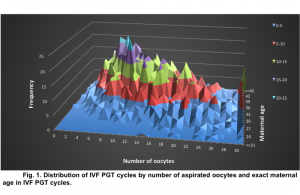 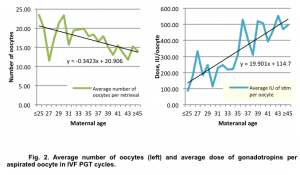 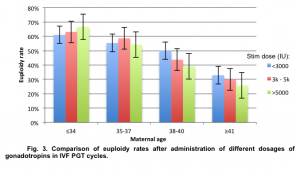 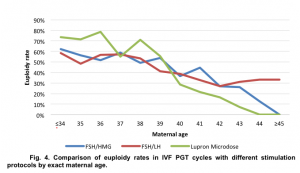 The average blastulation rate (number of embryos available for biopsy divided by number of 2PNs) in PGT cycles where less than 3000 IU of gonadotropins were used for ovarian stimulation was statistically higher than in PGT cycles where over 5000 IU of gonadotropins were used (34.7% and 24.2% respectively, p<0.05, χ2=48.48301). The difference in blastulation rates had a tendency to decrease with advancing maternal age. In a group of patients over 38 y.o. the difference in blastulation rates was not statistically significant (27.0% and 23.5% respectively, p<0.05) (Fig.5). 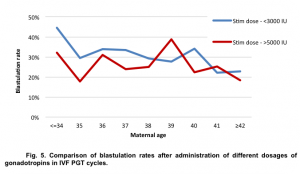 We observed that regardless of total gonadotropin dosage administered in IVF PGT cycle, the proportion of good, fair, and poor quality embryos available for biopsy remained stable, with a slight decrease in the number of good quality embryos with advancing maternal age (Fig.6). 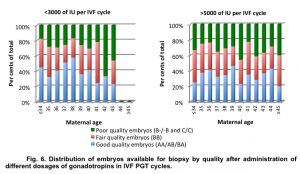 Analysis of ongoing clinical pregnancy rates in different age groups demonstrated no interrelation between maternal age and pregnancy rates after euploid embryo transfer. Using high gonadotropin dosages in a group of patients over 38 y.o. can significantly increase the quantity of aspirated oocytes and at the same time can help maintain proper blastulation, euploidy and pregnancy rates.

Analysis of the data proved that euploidy and ongoing pregnancy rates are not affected by high gonadotropin dosage in IVF PGT cycles. To improve efficiency and cost-effectiveness in IVF PGT cycles the maximum number of follicles recruited in each cycle should be limited only by medical safety concerns and patient well- being.