The vast majority of aneuploidies in preimplantation embryos are of maternal origin (either meiotic or mitotic) [1, 2]. The proportion of aneuploid embryos progressively increases with advanced maternal age [3]. Previous studies proved that aCGH and SNP based preimplantation genetic testing (PGT) are the most reliable techniques to determine the genetic status of embryos in vitro [4, 5].

The objective of this study was to identify association between blastocyst morphology and euploidy rates in different age groups in PGT cycles.

A retrospective comparative study was performed between January 2013 and March 2015. 535 cycles of IVF treatment with PGT were included in the study: in 364 cases blastocysts were analyzed by SNP, and in 171 by aCGH PGT.

A total of 2715 embryos were analyzed for euploidy rates and blastocyst morphology. Morphology of blastocysts was evaluated independently by two embryologists using Gardner classification [6] before trophectoderm biopsy.

We observed a strong correlation between euploidy rates and patient age. Euploidy rates decrease gradually with advancing maternal age. A decrease in blastulation rate paired with a decrease in euploidy rate caused a rapid reduction in the number of euploid embryos available for embryo transfer in PGT cycles (Fig. 2).

We observed that regardless of patient age, the proportion of good, fair, and poor quality embryos remained stable (Fig. 3), with a slight decrease in the number of good quality embryos (linear regression coefficients:
y = – 0.8652x + 42.572) (Fig. 3). 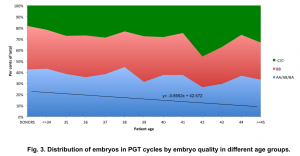 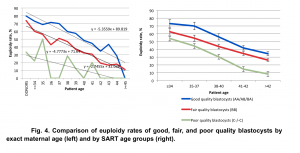 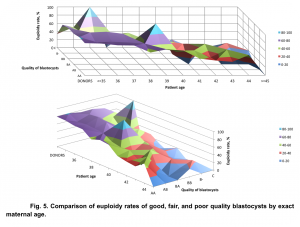 The time embryos became available for biopsy, on day 5 or day 6, reflected dynamics of embryo development in vitro. With advancing maternal age more embryos became available for biopsy only on day 6. The euploidy rate was significantly higher for embryos biopsied on day 5 than on day 6 – 59.62±4.1 and 47.41±3.8, respectively, p<0.05. This pattern was present in all studied groups of embryo morphology (Fig. 6). 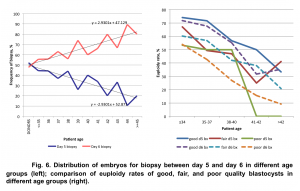 Our data demonstrated a statistically significant difference in euploidy rates between embryos biopsied on day 5 and day 6 with different degrees of blastocyst expansion (Fig. 7). 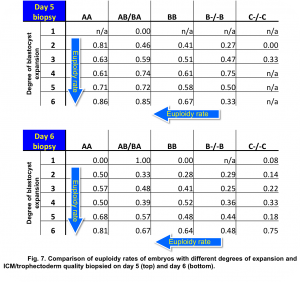 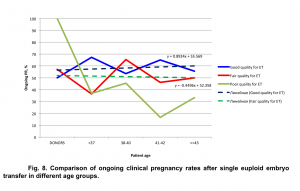 Reliable data about the correlation between morphology and euploidy of the embryos will not only help healthcare providers create the best treatment strategy for the infertile couple but will also help patients make an informed decision about the necessity of PGT based on maternal age, quality and quantity of the embryos.