Recent publications have demonstrated significant improvement in IVF treatment outcomes by implementing aCGH or SNP-based preimplantation genetic screening (PGS) (Bisignano A. et. al., 2011, Harper J. et. al., 2010). A highly attractive possibility of correlation between embryo morphology and chromosomal status has been discussed by some authors (Finn A., et. al . 2010, Alfarawati S., et. al. 2011).
The objective of this study was to identify the relationship between blastocyst morphology and euploidy rates analyzed by SNP and aCGH-based PGS.

A retrospective study of PGS outcome data from blastocysts biopsied on day 5 or day 6 was conducted to identify differences in euploidy rates in embryos analyzed by SNP or aCGH-based PGS.

All embryos were hatched on day 3 and were biopsied on day 5 or on day 6. Only good and fair quality embryos that had at least 3-7 herniating cells and met criteria for cryopreservation were considered for biopsy. Poor quality blastocysts were biopsied only per MD or patient request.

The difference in euploidy rates between embryos biopsied on day 5 vs day 6 had the tendency to increase with advancing patient age (Fig. 2).

Analysis of chromosomal status of blastocysts with different morphology demonstrated association of euploidy rates not only with quality of the embryos but also with degree of blastocyst expansion within the same quality group (Fig. 5). 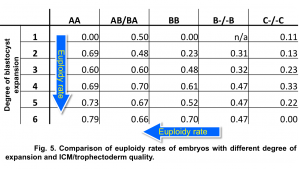 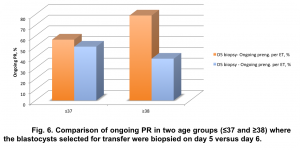 Overall euploidy rates defined by SNP were very similar to aCGH (52.4±8.1 percent and 55.1±6.1 percent, respectively, p=0.159707) and were not statistically different in all study groups.

Comprehensive chromosome screening provides an opportunity to re-evaluate correlation between embryo euploidy and embryo morphology in order to create the best treatment strategy for the infertile couple undergoing IVF treatment. There is a significant difference in euploidy rates depending on quality of the blastocysts and time they become available for biopsy; however, our data demonstrated no difference between the use of SNP and aCGH-based PGS to determine euploidy rates in human blastocysts.