The objective of this study was to compare pregnancy rates after SET for patients under 38 y. o. and over 38 y. o. in PGT cycles.

195 cycles of IVF treatment with PGT between January 2013 and December 2014 were included in the study. In all cases only one euploid embryo was selected for transfer. All embryos were hatched on day 3 and were biopsied on day 5 or on day 6. Only good and fair quality embryos that had at least 3-7 herniating cells and met criteria for cryopreservation were considered for biopsy.

A total of 1072 embryos were analyzed for euploidy rates and blastocyst morphology. Morphology of blastocysts was evaluated by Gardner classification (Gardner et al., 1999). 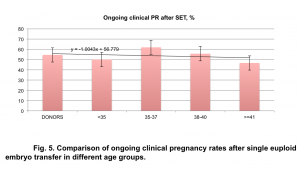